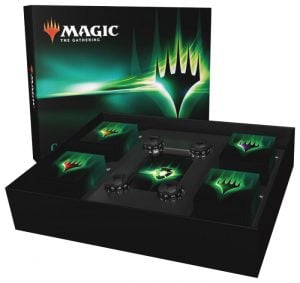 In less than just one month, we will see the second volume of Commander Anthology. As with its predecessor, Volume 2 is featuring four Commander decks. This time around it’s “Devour for Power,” “Built from Scratch,” “Wade into Battle” and “Breed Lethality.” For the more casual and semi-competitive Commander players, this is a great thing, as the reprints of old cards will be more accessible and less expensive. For those collectors out there don’t worry, the older editions shouldn’t be affected too much as it’s not a large print run.

For those who don’t know, Devour for Power was printed in the original Commander series back on June 17th, 2011, almost a full 7 years ago. This powerhouse is headed up by the Sultai commander Mimeoplasm, who excels at copying powers of creatures in graveyards. In Built from Scratch, the deck is headed up by Daretti, Scrap Savant, who was part of the first planeswalkers allowed as commanders in Commander 2014. Daretti himself lives up to the name of Scrap Savant as he synergizes incredibly well with artifacts.

Next, we have Wade into Battle with Kalemne, Disciple of Iroas leading the charge, literally, with that double strike and vigilance. This commander appeared originally in 2015 with the first taste of experience counters. Last, but definitely not least, from Breed Lethality is Atraxa, Praetors’ Voice. For many in the Commander community, four-color commanders were long awaited and Atraxa definitely didn’t disappoint. Not only does she have a wide variety of evergreen abilities (Flying, Vigilance, Deathtouch, Lifelink), she gives end step proliferation which many have put to good use in a myriad of ways.

It’s great to see Wizards of the Coast continuing to provide support for Commander players across the globe with reprints of older decks. The continuation of Commander Anthology volumes helps create a healthy gaming environment for all Commander players. By giving more access to these great older decks, new and seasoned players get a fresh start at new deck brewing ideas. While not all of the oldest ones have been reprinted yet, it’s only a matter of time. For now, we just have to be patient and keep looking forward to both the new and older sets that are up and coming.